The first section is devoted to his extended stay in Berlin, from early through June, This, of course, was the period when The Berlin Wall came down, and Germany began the long process of reunification. The East German Guard towers could see you if you did, and cars patrolled the other side.


Construction is rampant, with huge cranes erecting huger buildings. Ten years later, in , Berlin is nearly unrecognizable with all the new skyscrapers, and there is an entire generation of young adults who grew up without the wall looming over them. How did this change affect the rest of Germany? We find these answers here, too. He visits small villages with unpaved roads, towns essentially unaffected by the big events in the east.

As Nooteboom puts it, Germany is really a collection of several different countries. This giant monolith is covered with bright, colorful graffiti, and it looks almost cheerful. He lived in Berlin for those three periods, and he spent a year living in Los Angeles; he passes the winter away in Spain. My point is that his views of Berlin are neither those of a native Berliner nor of a complete foreigner.

This unique viewpoint allows us to see Berlin and its remarkable last quarter-century through the wizened eyes of a German citizen and the unjaded eyes of a world citizen. Nooteboom has a flair for language as well. His descriptions of both urban and pastoral scenes evoke clear pictures in a broad palette of color and shade; his visions of war-crumbled buildings make us wonder what Germany could have been had World War 2 never happened. 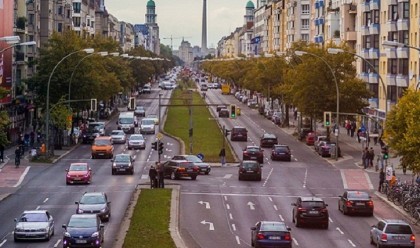 Certainly, this book will appeal to history fans, as it gives first-hand accounts of modern German events. Travel aficionados should appreciate the well-narrated journeys down the various roads to and from Berlin. This book relates the demarcation not only of The Wall, but between the world we grew up in and the world our children and grandchildren will inherit. If only for its ability to straddle that line so eloquently, this book is a remarkable achievement.

Highly Recommended Apr 05, Kirsten rated it liked it Shelves: pops , non-fiction. I feel like I've been reading this in real time.

More information on traffic and travelling in Berlin

These are generally good essays with a lot of things I have to stop and think about. There were many moments I lost the thread through references I didn't know and often am not compelled to seek out. In the more Berlin-focused pieces, there are plenty of moments marked with flags that I will have reason to come back to, but also some that I felt too disconnected from. I came away with the impression this is someone I would've enjoyed running into I feel like I've been reading this in real time.

Zeer beeldrijke taal, maar Impressies van zijn verblijf in Berlijn en reizen door Duitsland in de periode febvruari tot mei ; eerder al verschenen in het tijdschrift Elsevier. Berlin just after the wall was built, Berlin during the cold war with the wall between east block and west block and Berlin after the Mauerfall as the German calls it. Super cool book, mostly because I live here and I know what he is talking about.

Roads to Berlin by Cees Nooteboom – review | Books | The Guardian

Nooteboom's work has been extensively translated into English, Spanish the country of his residence , and above all, German - in Germany, even his collected works have been published and one could safely say that he is more popular in that country than in The Netherlands.

The reason is probably that Nooteboom's work has an "idealistic" bent, it is full of whirling thoughts, and his sentences also are rather long - general characteristics of German prose.

The display of erudition one finds in his work is probably another element that puts off some Dutch readers. That doesn't mean in the least Nooteboom is German - he is much more than Dutch or German or Spanish or whatever nationality, he is an all too rare example of a pan-European intellectual. Nooteboom is a modern Renaissance man, with a huge field of interests ranging from philosophy and political thought, to contemporary art, literature, music, architecture and almost anything else.

I always feel envious when in his essays he casually scatters names of famous thinkers and writers, while it is clear that he has also actually found the time to read and study them. In this way he became witness to one of the most significant turning points in 20th century history, mapping the changing moods of the country, describing the pivotal events of Germany's difficult passage to reunification. We are lucky with this observer, the most informed and perceptive one you could wish for. Nooteboom always sees present events through the lens of history.

He writes a beautiful prose, poetical and whimsical. He is both personal and objective. Besides the Wall which is viewed from countless perspectives including that of the Wall which is no longer there , there are long discussions about Germany's history, its influence on its neighbors, and the question which was deliberated in whether the Germans themselves or its neighbors wanted Germany to be again reunited and become a large force in Europe. Of course this is what has happened, and now Europe itself is unthinkable without Germany. But Nooteboom also shows us other interesting vistas: mythical, such as the huge statue of the legendary German tribal leader Hermann in the Teutoburg Forest, or the grotto of Emperor Barbarossa; political, as Nuremberg with Hitler's Walhalla and Nazi Party rally grounds, or the bridge into Poland over the Oder; literary, as the Brocken of Walpurgisnacht fame in the Harz mountains and Goethe's Weimar; weird, as the East-German Museum of the Unconditional Surrender of Fascist Germany, or an exhibition of the disintegrating aeroplanes built by the artist Anselm Kiefer, or a rhapsody on German eagles.

Het maakt mij zelfs nog nieuwsgieriger naar deze grote buurman en het heeft mijn aandrang om deze fascinerende stad nog een keer te bezoeken alleen maar versterkt. While visiting a local bookstore just to pass some time my attention was grabbed by the title of this book and out of curiosity I started to read the first pages to see wether the style of the writing appealed to me. But within a few pages I was gripped by the narrative and observations. He was a witness, but at the same time a distant spectator, of the events surrounding the fall of the Berlin Wall.

This book has on the one hand a very light touch in its style of writing at times you read through pages at a lightning speed , almost poetic but on the other hand there were moments it was quite heavy handed and filled with literary references with which I had no connection or were even totally unknown to me. In fact, it has made me even more curious about this virtually unknown neighbour of mine and has also rekindled my urge to visit this fascinating city again.

Especially in this book, where he constantly presents himself as a foreigner visiting Berlin and other German cities during a most historically remarkable time, he almost casts himself as an intruder. I picked it up randomly at the library, and the beginning did draw me in; the time period, the location, the effervescing social scene and people's fears and hopes and the way they were conveyed in conversations that Nooteboom had and overheard were all exciting to read about. But then it started to drag on.

Especially when he went into the third person in one essay, it became unbearable -- almost metaphysical in a way, without the riveting dynamism of the earlier parts. That's when I started skimming. The last few essays -- written recently -- were especially relevant to today's economic and political environment in Europe. This is quite a marvelous book, the heart of which is a series of essays about Nooteboom's year-plus stay in Berlin in , when he observed the fall of the Wall and the run-up to reunification. But he'd been there before, the first time in , and he returned often over the years, with the last essay in the book dated April In addition, some of the essays recount his thoughts on travels in other parts of Germany, most notably Bavaria and Munich.

I can't speak to the original This is quite a marvelous book, the heart of which is a series of essays about Nooteboom's year-plus stay in Berlin in , when he observed the fall of the Wall and the run-up to reunification. I can't speak to the original Dutch-language edition, but the writing in the English language translation is often very fine, and I found most of the essays both eloquent and persuasive.

There were a couple in particular the one entitled, "Dead Aeroplanes and Eagles Everywhere" that verge on annoying pseudo-profundity, but all in all, very worthwhile. One minor complaint: Why date the essays only at their ends? Although in many cases the time frame became apparent from the events recounted, I found myself paging ahead at the beginning of each one to find out for certain when it had been written. Jan 11, Amy rated it it was amazing.